Aside from being a scenic fourney through rolling farmland, tunnels and lakes, the Great Victorian Rail Trail is rich with stories from its past lives.

The process of researching railway period history, stories and pictorial collection, has been greatly assisted by the support and guidance of railway historians and the Australian Railway Historical Society. Their intimate knowledge, insights and anecdotes of the Mansfield to Tallarook Line - the workers and families; politics and progress; tragedies and triumphs, are limitless. View stations below, where you can experience history today ...

The main northeast line from Melbourne reached Tallarook in November 1872. Ten years later, in 1882, a rail line was surveyed as far as Yea and the construction contract awarded. The route followed the curves and undulations of the valley, hugging the steep walls on the south side of the river. The terrain was not easy. In the first 11.2 kilometres to Trawool there were 17 curves and 68 changes of grade. At a cost of £97,637 pounds (around $20 million) and 23 bridges later, it took over 1,000 men to complete the railway line as far as Yea

The first train from Tallarook to Yea arrived on Tuesday 20th Nov 1883. Initially the return Tallarook to Yea train service was a daily Goods and Passenger train combined. The track speed was 60 km/hr.

The branch railway line to Alexandra was long in coming. In the 1880s, Alexandra lobbied long and hard for the line to Mansfield to be routed directly through their town. They were beaten by nature and the engineering realities of the hilly terrain and the steep gradients that surround the township. The direct line to Mansfield was built to the north.

In September 1890, a short compromise branch line was constructed (7.1km) from Cathkin in the direction of Alexandra. On 11 August 1908 work began on the Alexandra Township Railway Extension. This was through rough, steep, 1 in 30 grade country and was costly to construct.

After nearly 15 years of agitation, deputations, many setbacks and numerous changes of Government, work began on the Yea to Mansfield line on 27 April 1887. The first train steamed into Mansfield on 6th October 1891. It was a wood burning W Class loco and although 15 minutes late, it arrived to the delight of some 2,000 onlookers.

The engine was one of the American-style engines used on branch lines and made by Phoenix Foundry at Ballarat. It was given a rousing welcome by The Mansfield Brass Band. 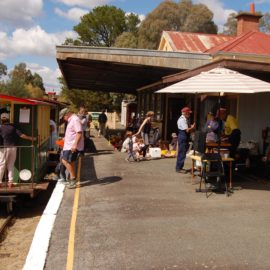